The Baptism Traditions and Customs in Vor - Pommern 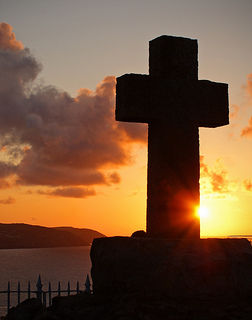 It was important that the child be baptized as quickly as possible after his birth, especially when a baby was born at the same time and in the same village where there had been a death and the body was not yet buried. The baptism had to take place before the burial because it was feared that the spirit of the dead who had not been buried could cause the child to grow up to be an evil person, or even to die. The people connected this belief to certain Bible passages in which the spirits are mentioned.

There was another totally different custom in some homes where twins were born. The pastor would only see one child when he arrived at the family's home. The other child had disappeared. Someone had hidden it under the baptismal table. When the mother was asked for the reason for this, she said that in her family it was the custom to baptize one child at a time. She could not give any other explanation. Obviously she confused baptismal customs with certain superstitions.

It was believed that when a child was born between eleven and twelve o'clock in the morning, that child would be able to predict the future.

In still another house the father of the newborn would go into the garden and plant a tree. He believed the child would grow up to be strong and good. For a boy he would choose an apple tree. A pear tree was chosen for a girl. For twins he would plant a cherry tree.

Water plays an important role in baptism. It was supposed to have healing powers. One woman told of how she had saved the baptismal water and used it to make milksop, using it as a medicine to make her sick children well. Another funny story about baptismal water was that if two children of different sexes are baptized with the same water, the boy would never grow a beard, but the girl would.

The godparents played an important baptismal role. It was believed that their behavior could influence the life of the child. Often the father and mother did not go to the church with the godparents to baptize their child. Usually aunts and uncles were chosen. In the case of a boy there would be two males and one female.  In the case of a girl there would be two females and one male. The father of a boy could select two relatives from his family to act as godparents while his wife could only choose one of her relatives. If the child was a girl the mother could select two relatives from her family to act as godparents while her husband could only choose one of his relatives. Among the godparents there had to be a young woman chosen, so that this honor could be bestowed upon her for the first time. She was then known as the "Jungfer Paten." She was the one selected to carry the child to the church and to the baptismal font, if she walked quickly it was believed that the child would walk early.

The normal christening was usually held on a Sunday right after church services. The entire congregation would stay to witness it.  Immediately after the baptism the godparents would slip their "Patengeschenk" under the pillow of the child. This was usually two Taler. The taler was placed in a small envelope with a pious saying written on the outside.

It was the custom for the parents to give a letter to the godparents at the same time the baptismal present was given. The godparent dared not leave the room before it was opened. He or she could do something impure, and that would make the child impure.

The godparents recited an old verse when the child was returned to
his mother. "Einen Heiden hab ich rausgetragen, einen Christen bring ich wieder. Dies nun wuensch ich meinem Paten, dass er moege wohlgeraten. Lasst ihn in die Schule gehn, lehrt den Katechismus fein. Wo ihr eltern nicht koennt sein, da will ich zur Hilfe stehn." (Rough English translation: I bring a Christian back to you. I now wish that he would like his godparents. Now I leave it to the school that will teach the catechism to him. When the parents are not available I want to be of assistance in his care.) There are many examples of the close relationship between godparents and their godchildren.